Catching Up - The Geek Speed Round

Wow! Almost a year has passed since my last post. I’ve been a bit blessed with tons of projects over the last several months so I couldn’t find the time to write. (Well, that, and I spent most of my free time playing video games)

So what have we missed so far in the last 11 months? I’ll do some quick recaps of things geek that happened the past year (while I was busy grinding through three MMOs) with the Geekin’ Out Loud Speed Round.

Marvel Studios came out with Iron Man 3, and although it wasn’t as good as the first two, it was still a whole lot better than 80% of the superhero movies that came before it. Robert Downey, Jr. was still awesome as Tony Stark, although I wasn’t too keen on the fact that he spent more time outside the suit than in it. The new suits, along with the action were all sights to behold. My only two other gripes were the fact that they made a mockery out of The Mandarin (although Ben Kingsley gave a stellar performance) and that they gave Pepper Extremis powers.

DC on the other hand started what we all hope to be a Justice League film build-up with the Man of Steel, starring Henry Cavill as the Big Blue Boyscout. A lot of people have mixed feelings about it but it still made a ton of money at the box office. There were three things I found a little off about the movie. First was that Lois found out too early (and too easily) that Clark was Superman. Although it has always puzzled me how he could hide his identity with just a pair of glasses, it was one of the comic book facts we all just lived with and accepted without question. Second was the fact that this Superman didn’t seem to care much about collateral damage. It was totally out of character that he would take the fight to populated areas and level entire structures (with people in them) and even blow up a gas station to boot. Heck, I think he only went out of his way to save innocents twice in the entire movie. Lastly, I wasn’t too keen on the fact that he killed Zod. Yes, even in the comic books, Superman has killed Zod, but the circumstances that surrounded this one didn’t seem to justify it. But despite these and other forgivable holes in the plot, Man of Steel was still one of the best superhero films I’ve seen in my lifetime. Hands down, the best depiction of Superman’s powers ever!

Marvel released their much awaited Marvel Heroes MMO last month and although it doesn’t come close to the graphics and game play of DC’s DC Universe Online, it’s still really nice to be playing characters like Spider-Man, Wolverine, and the Hulk in an online setting. It’s was designed by the guy who conceptualized Diablo and Diablo II, so it pretty much felt like playing Diablo but with Marvel characters.

Blizzard also came out with the highy anticipated sequels Diablo III and Starcraft 2: Heart of the Swarm. I’ve played during the beta of Diablo III and have tried Starcraft 2 on some of my friend’s machines, but I haven’t really played them extensively just yet. Maybe next time Blizzard could give me a copy of these games for review so I’d have more to say about them (*WINK!*).

Lara Croft was also resurrected with the a new redesigned Tomb Raider game which looked absolutely beautiful. It was just too damn short… I finished the entire game in a weekend. Hopefully they make the next one a lot longer.

Marvel Comics ended some short runs and started new ones with their (fairly) new Marvel Now! line of books. The new Thor God of Thunder series boasts of a very interesting story involving three versions of Thor courtesy of Jason Aaron with awesome art by Esad Ribic. The Hawkeye series by Matt Fraction and David Aja is also a very good read.

What I’m most excited about though is what Brian Michael Bendis is doing over at Uncanny X-Men and All New X-Men. This is the guy who made the Avengers relevant again and he’s doing a phenomenal job with our Merry Mutants so far.  I was a bit skeptic about the X-Men of the past time-traveling to the present, but I’m totally on board now. Bendis’ innovative plots coupled with Stuart Imonnen’s gorgeous pencils really make All New X-Men a book I can’t wait to read every month (or is it every 2 weeks now?). If only Chris Bachalo did Uncanny more regularly…

Speaking of time travel, Marvel’s big event, Age of Ultron, just ended and who knows what repercussions it will have on the rest of the Marvel universe.

I’m still devastated by the fact that they killed Peter over at the spider-side of the Marvel U but I am still following Spider-Ock’s adventures on Superior Spider-Man. It still is an interesting read and Dan Slott is still one of the best Spider-Man writers ever, but this thing with Doc Ock as Spidey will never (and shouldn’t) be the status quo for very long. Peter Parker is and will always be Spider-Man! This is like when DC made Dick Grayson Batman!

Oh and my all-time favorite artist, Joe Mad is back drawing Spidey, Wolverine and Elektra over at Savage Wolverine! … So that’s always great news!

Other notable Marvel titles include the main Avengers title by Hickman and Opeña, and the all-female, adjective-less X-Men by Wood and Coipel.

Over at DC Comics, Scott Snyder and Greg Capullo just finished the “Death of the Family” storyline over at Batman, which featured the return of the Joker. And they’re now starting the next big arc, “Zero Year”, which digs deeper into Bruce Wayne’s early years as the Caped Crusader.

In Batman Incorporated, Grant Morrison killed off the latest Robin, Damian Wayne, at the hands of The Heretic who’s actually a clone of Damian himself. Morrison has said that this death would be permanent and that Damian will not be resurrected… ever. Yeah, right. 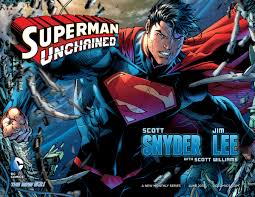 Geoff Johns ended almost a decade-long stint with Green Lantern, introducing yet another Green Lantern for Earth, Simon Baz, killing off most of the Guardians of Oa, and making Hal Jordan the head-honcho of the entire Green Lantern Corps. Johns is still on writing duties for the main Justice League title and has recently released a new Justice League of America book with David Finch.

Lastly, Batman scribe Scott Snyder and the legendary Jim Lee teamed up to bring us a brand new Superman title, Superman Unchained. It’s only on its second issue, but with Snyder and THE Jim Lee on it, do we really have to ask if it’s any good?

So that’s it for the first ever Geekin’ Out Loud Speed Round. I expected it to be real short but I guess I had more to say than what I originally planned. Here’s hoping I stop working and playing long enough to write something again soon.