Trying out DCUO a year later 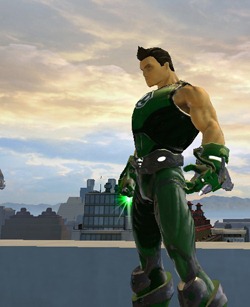 DC Universe Online (DCUO) is a Massively Multiplayer Online Role Playing Game (MMORPG) released by Sony Online Entertainment (SOE) in early 2011. The game lets players step into the role of their very own superhero or super-villain, mentored by either Superman, Batman, Wonder Woman, Lex Luthor, Joker or Circe, and explore the cities of Metropolis, Gotham, Central City and other locations in the DC universe.

The main premise of the game is that the Lex Luthor from the future goes back to the present and releases millions of nano-sized devices called exobytes that grant most of the human population a variety of superpowers. This Luthor comes from a future where Braniac, with the help of Lex himself and the Joker, has successfully killed off all of the world’s heroes and has conquered Earth. Lex then goes back in time to prevent this from happening after being double-crossed by Braniac.

Now I know this is more than a year overdue, but I only started playing the game in May of 2012, a month after the game went free-to-play. You see, I was excited about the game when it first came out, but the cheapskate that I am, I didn’t wanna have to shell out an extra $15 a month to play the game. So when the opportunity to play the game for free presented itself, I immediately grabbed it. That didn’t last long though. After a week of playing for free, I purchased some game content (I wanted some Green Lantern hard light powers) and upgraded to a Premium access. Then another week after that, I started paying for Legendary membership, which gives you access to all of the game’s now vast content (I needed to get my hands on some of those Flash-inspired gear), and it costs exactly the same amount that I didn’t wanna spend a year ago. What a sucker, right?

So now after almost two months of playing the game, here’s what I think of DC Universe Online:

DC Universe Online is a pretty solid game. Interesting concept and storyline, with a lot of intense and challenging instances. I’d personally prefer an increase in the current level cap, just because grinding for gear in the end-game could get a little less repetitive and boring if you get something more than just marks/currency to buy equipment. Either that or add a whole lot more end-game content so players don’t repeat the same challenges and instances every single day. A month or so is enough to be able to try most, if not all, the game has to offer and the lack of progress, despite hours of grinding after you reach the level 30 cap, will probably make most players move on after a couple of months of playing.

If you haven’t tried this game yet, you can check it out and download the client at www.dcuniverseonline.com. It may be short-lived, but it is definitely worth your time.

Meanwhile, I am now contemplating whether to finally try out the new Diablo III game or play that other MMORPG I’ve been itching to try for months, Star Wars:The Old Republic. Although if I do, it might take me another two months to write my next entry. Playing video games really does get in the way of my writing.